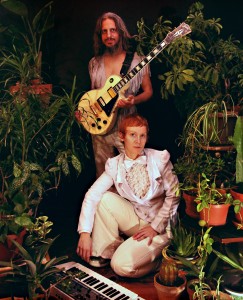 Transcendental audio/visual rock duo Darsombra have packed and prepared their shuttle for launch, readying themselves for journey to inner space. Brian Daniloski (a veteran of metal bands Meatjack and Trephine), pilots, navigates, and controls the sound of Darsombra, alternating between searing guitar riffs, leads, loops, mammoth vocal swells, and soundscapes.  He takes one part metal, one part psychedelic rock, one part experimental, and dashes of prog, glam, and krautrock, to soundtrack the voyage. Filmmaker Ann Everton joins him on vocals, synthesizer, and percussion, as well as stewarding us along the way by projecting her kinetic, psychotropic videos specifically composed to the music, engulfing the audience within the trip.

Following releases on At A Loss, Public Guilt, Underradar and others, Darsombra worked with Exile On Mainstream for the release of Climax Community in 2012. The three tracks on the LP traverse forty-five minutes of the outfit’s unique, slow-building, organic transcendental rock. Recent tours in the U.S. and Europe have paired Darsombra with Wino, Jucifer, Thrones, Floor, and Stinking Lizaveta.