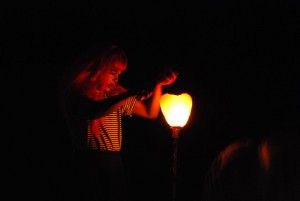 Marcelline (b. Yaounde, Cameroon 1993) is a multimedia artist living and working primarily in Baltimore, Maryland. A recently naturalized citizen and graduate from MICA’s Interdisciplinary Sculpture Department, their work situates itself within the marriages of protest, autonomous props and the various modes of recording “actions” through printmaking. Often choreographing performances within site-responsive installations, their practice hinges on material-based transforrmative processes such as deconstructing a white tyvek suits into a hide or spray-painting fire onto a white ensemble in ode to Buddhist monk self immolation. The works exist ambiguously as an ongoing investigation of time-sensitive identity politics regarding issues of nationalism, black wo/manhood, otherness in the digital realm etc…; .