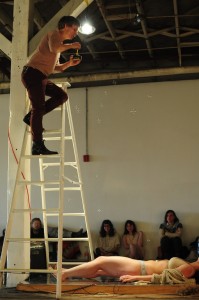 Isa Leal holds a B.A. in Theatre and Dance From James Madison University (2006). After graduation she worked for years in collaboration with Zen Monkey Project and Stephen Nachmanovich, to develop scores for music/movement improvisation in the architecture of a cooperative art gallery of which she was a resident member, McGuffey Art Center. Shortly there after she began her own teaching and research practice, with her company and studio,This Little Bird (Charlottesville,VA.). In 2010 she relocated to Baltimore MD to satisfy her hunger for collaboration and experimentation with her new company Iron Rainbow Dance Theatre. In November of 2012 she completed a year long series of workshops with Steve Paxton (Merce Cunningham, Judson Dance Theatre)and Lisa Nelson, were she was selected to join movement artists from around the world to study Material for the Spine, The Tuning Score and the combination of the two (the first time they were taught together!) Isa was been invited to show at Akimbo Dance Festival, Transmodern, and Artscape. She has guest taught Contact Improvisation at Towson University and Directed/Choreographed a Piedmont Virginia Community College.
In 2013, she completed an international solo tour called “Experiments!” where she shared her research-in-performance towards “empathic action” and self published her zine “I am Not a Capitalist.” She was also recently published in the Contact Quarterly Newsletter ( International Publication) for “On Embodiment and Social Change.” She hopes to continue to build collaborative relationships in Baltimore, and further develop her teachings and research as a touring artist.